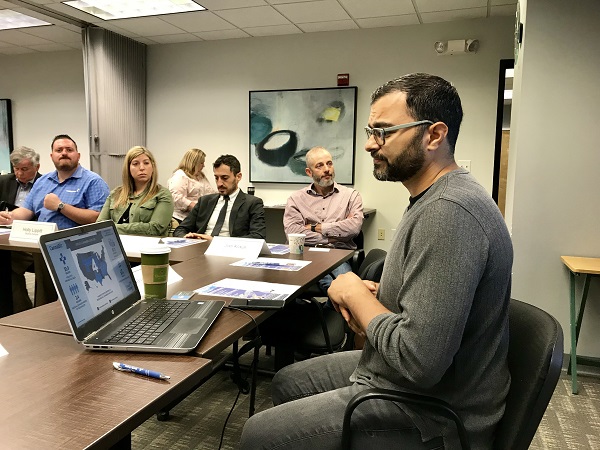 Like other industries, the cannabis trade is using advanced technologies to dramatically change the way it grows and sells its product to consumers.

The use of robots to grow pot and mobile marijuana cafés to gather and analyze data on users’ behavior are just two of the tech innovations that a top industry expert discussed at the Morris Chamber of Commerce meeting on June 18, held in Florham Park.

At the meeting, attorneys, technologists, pharmaceutical representatives, cannabis dispensary workers and others listened intently as Serrano rattled off a list of cannabis-related technologies, all transforming the way this leafy and much-maligned plant will be used to meet the widely anticipated heavy demand for both medical and adult recreational use.

The flourishing cannabis business is a boon for tech companies, which are providing everything from artificial intelligence (AI) to blockchain technologies to help grow and sell marijuana. Some published industry reports project that the cannabis business will hit around $15 billion globally this year and could more than triple that amount within the next decade.

Serrano said that one of those cannatech companies is Grownetics (Boulder, Colo.), which uses automation technology and AI to grow marijuana. With this technology, cannabis growers can improve security, lower energy use and reduce other operational costs, thus becoming more profitable in a competitive market, he added.

Grownetics utilizes the information from AI to track plant growth rates, detect potential nutrient deficiencies and even tell which bugs are feasting on the plants.

Genetic science is also being used to help cannabis growers differentiate their product in an increasingly saturated marketplace. Though it’s very difficult for U.S. producers to obtain a patent on pot seeds, according to Serrano, they can produce their own cannabis strains by “turning off and on” their plants’ genetic code, giving their weed unique characteristics that will distinguish it from competitors’ products.

Collecting data on consumer behavior is essential for any business, especially for the emerging cannabis industry, which is aggressively seeking the valuable customer information needed to grow into new and existing markets.

Hot Box, a Denver-based cannatech firm, is building its business on the belief that the best way to learn more about consumer behavior is within a social setting, said Serrano. The firm has built mobile cannabis clubs that collect data on users’ behavior and can be easily moved from one location to another.

MOST CANNATECH FIRMS WAITING TO COME TO NEW JERSEY

As for New Jersey, it probably will take some time before the state attracts any significant cannatech firms, as they have little incentive to do business here until the state legalizes adult recreational cannabis use and significantly expands the availability of medical marijuana.

There are some New Jersey enterprises that aren’t waiting for state to give the green light on cannabis-related business activities.

One of them is Applied Cannabis Sciences of New Jersey (ACS), a Woodland Park-based company that has recently inked a deal with a Canadian-based investment firm.

Earlier this year, ACS announced that it would file an application with the state’s department of health to open and operate cannabis businesses. New Brunswick-based pharmaceutical giant Johnson & Johnson is conducting research on cannabinoids (chemical compounds found in the cannabis flower), though that work is being done in Canada.

For the most part, said Serrano, the state is lagging behind in the cannatech sector because of the sector’s hazy future in what he termed as the “green rush.”

Serrano thinks that, as a result, cannatech firms will continue to operate mostly in Western states, where both recreational and medical cannabis are legal, and in other countries like Canada, which legalized weed last year.

Amid widespread speculation that New Jersey will be one of the next states to join the spreading U.S. legalization of weed, the state appears to be in no hurry to be added to that list.

After the state legislature failed to legalize marijuana this spring, this hot-button issue is expected to go before voters in a referendum in 2020. And although some recent polls show many New Jersey residents supporting state-sanctioned recreational cannabis sales, it’s still a toss-up whether legalization will win voter approval next year.

When asked by an audience member why the state continues to drag its heels on licensing pot shops, Serrano, a medical cannabis user, replied, “New Jersey wants to put more power in fewer hands and to monitor the program more easily.”

John Kullmann, vice president of technology solutions at Parsippany-based software firm Macrosoft, which helped organize the talk, agreed that the prospects of New Jersey becoming a cannatech hub look promising. “There’s going to be a lot of industries that will pop up here to support this industry.”